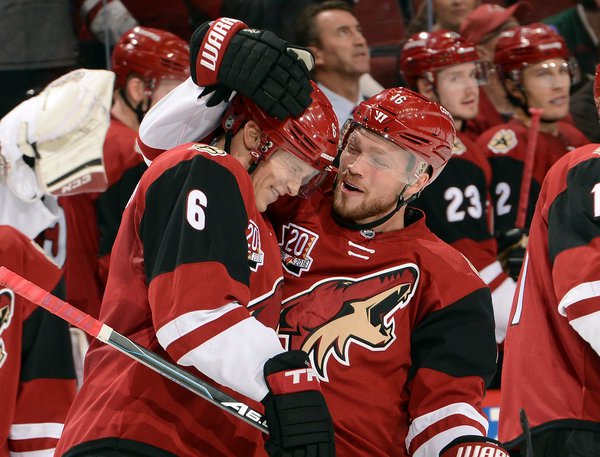 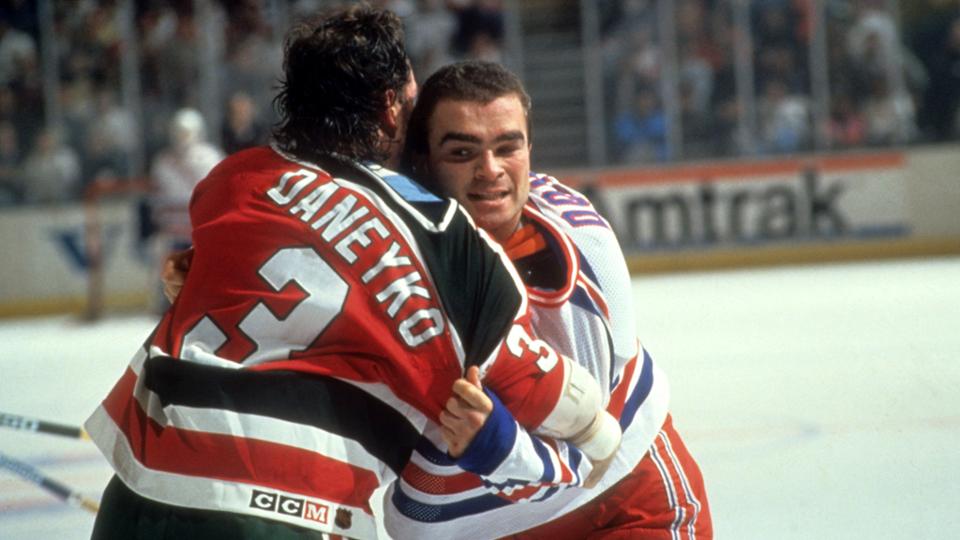 Tie Domi hasn’t played for the Rangers in over two decades, but he remains one of the most popular members of the Blueshirts alumni. Fans loved his fearless attitude and his ability to stick up for his teammates often against players bigger than his 5-foot-10 frame.

NYRangers.com recently caught up with the NHL’s leader in fighting majors to talk about his time in New York, the way he played the game and what keeps him busy in retirement.

You spent three seasons with the Rangers. Favorite moment in New York?

TD: I was really figuring out my life and my career. I was living the dream. It was pretty cool to start my career in New York City. I learned as I went. I wouldn’t want my kids doing it that way [laughing], but it was a special time and a moment I’ve cherished for the rest of my life. The friendships and the bonds that I built while I was here I’ll never forget.

Fans still tell you you were their favorite player, and you always get a warm reception when you pop by. How special is that for you?

TD: I actually went to a function the other day at Pier 60 for for [multiple sclerosis] and my friend was being honored and they said I was there and when they mentioned I was there, the fans cheered really loud. There were Giants and there were Jets and there were other New York athletes. I haven’t done that in New York in a long time. It was a great feeling. It was so long ago but it feels like yesterday when people remember you and cheer you. I’ll always cherish those moments when fans come up to you. I feel blessed. There are very fond memories of not just my career, but starting my career in New York was a special thing.

You were a pretty feared player with some legendary bouts over the course of your career. How much pride did you take in filling that role on your team?

TD: That was honestly something that the guys in my era – we only knew one way. The guys that did what I did we all share that brotherhood that we dressed every game thinking we may have to take care of our teammates. That was our responsibility and those were our roles, to make guys accountable. We policed the game. That’s what I did.

The game obviously has changed, but having the most fights in NHL history is a record that I guess won’t be broken now. There were a couple of those with [Bob] Probert that were probably lifted up for, but the rest were either for my teammates or my team, whether it was protecting someone or changing the momentum of the game. That’s the only way we knew how to play the game.

Our mentality was just different back then. It’s just a total different game [today], and I think for the better.

Aside from watching your son Max with the Coyotes, what are you doing to keep busy now that your playing days have ended?

TD: I’ve got three kids so I’m focusing on my kids. I consult for some companies that I feel comfortable with and that I know I can bring value to. I’ve been around a while. I’ve been in the business world pretty much my whole career. I started doing business when my dad died and I was playing for the Rangers. After that summer I started in business. I’ve worn a lot of different hats and have done a lot of different things.

At this stage in my life, my kids are my focus. Obviously my son [in Arizona], and I have two daughters that are just as important to me. I have to balance all three and try and give them guidance the best way that I can. 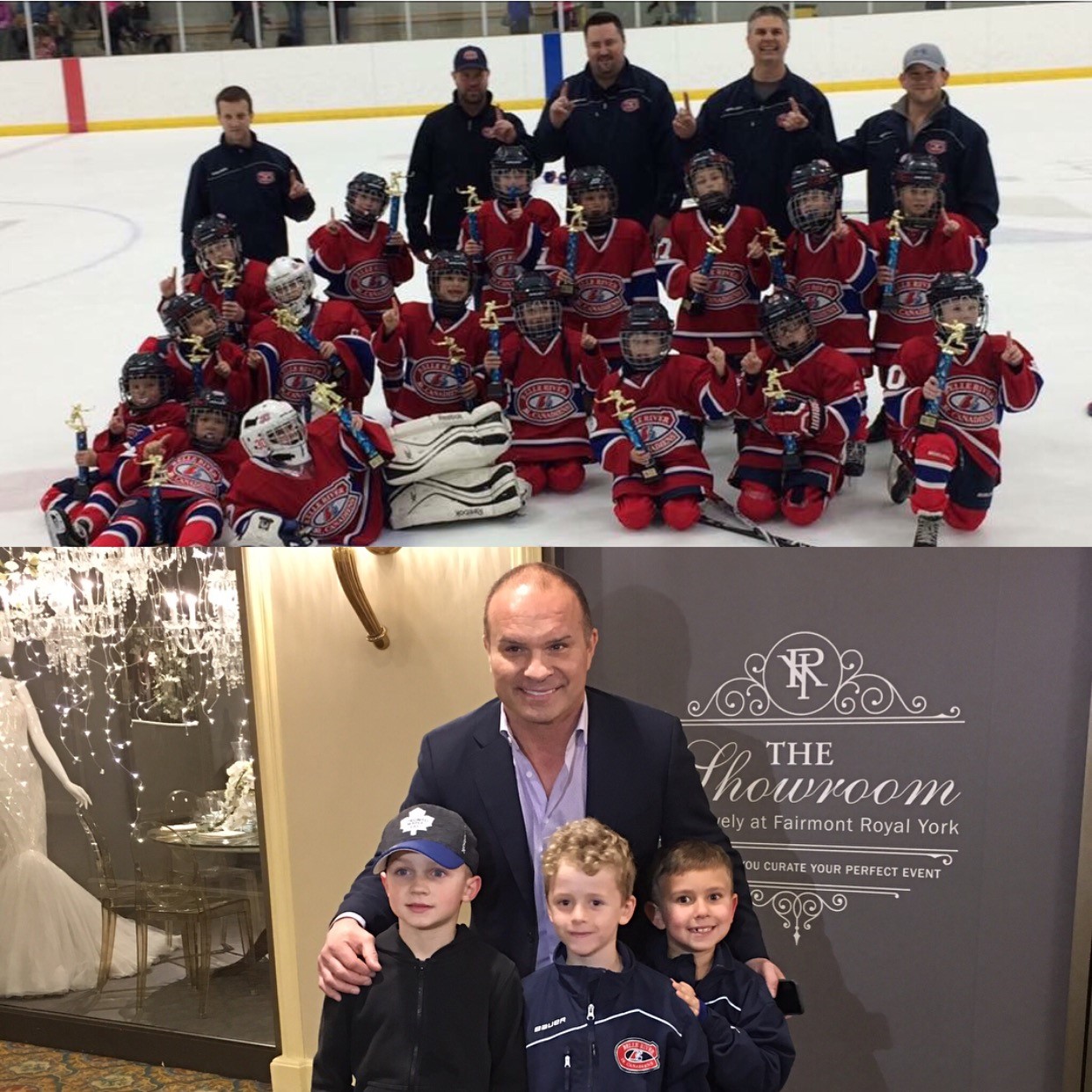 Just wanted to write to tell Mr. Domi that the boys that he stopped and spoke with at the Fairmount Royal York Hotel in Toronto on Thursday Jan 19th went ahead and won the Diamond Division at the Curtis Joseph Tournament in Newmarket!

Thanks so much for stopping and speaking with the boys!

Please tell Mr Domi that when he’s in Belle River the rest of the team would love to meet him! 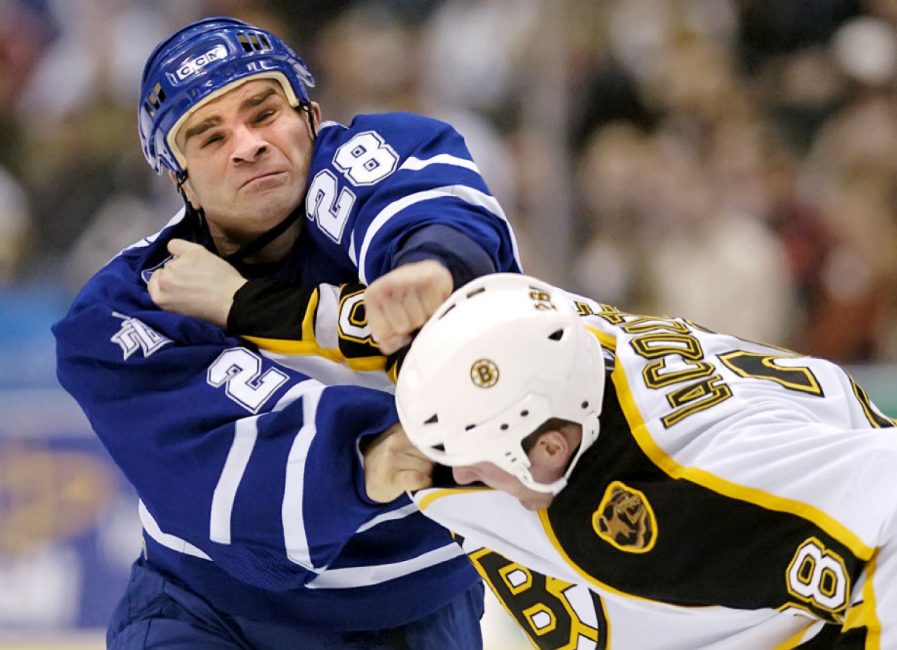 With the exception of alumni games and Slap Shot movie reunions, it’s taken just one generation to usher in the end of the tough guy in a faster, leaner NHL.

Tie Domi is no different than any proud hockey father when it comes to worrying about his son.

Having spent 16 seasons establishing a reputation as one of the NHL’s fiercest enforcers, Domi fully appreciates the importance of protecting a team’s marquee players. What concerns him: Who has the back of his 21-year-old son, budding Arizona star Max Domi, at a time when the league has all but eliminated the role of on-ice policeman?

“Obviously, I don’t agree with it, especially having a kid in the NHL now and watching the so-called accountability factor,” Tie Domi said during the recent Centennial Classic weekend in Toronto. “We used to make people accountable. It’s definitely a different taste for sure.”

A sour one, too, after Domi’s fears were realized last month when his son broke his hand in a fight with Calgary’s Garnet Hathaway.

“It’s a learning lesson for him,” the elder Domi said. “Unfortunately, he has a little bit of me in him.”

With the exception of alumni games and Slap Shot movie reunions, where the Hanson Brothers will live forever, it’s taken just one generation — from Tie to Max Domi, for example — to usher in the end of the tough guy in what’s become a faster, leaner and far less gap-toothed era. The evidence was apparent in the Leafs and Wings alumni who took the ice last weekend: The game featured five of the NHL’s top 20 in career penalty minutes, including all-time leader Dave (Tiger) Williams (3,966 penalty minutes) and Domi, who ranks third (3,515).

“How many is there?” cracked Williams, wearing a cowboy hat and big silver belt buckle, when informed the game appeared to be a reunion of aging enforcers. “Well, good. They all showed up.”

“Oh, I don’t know. We’ve never hit a president before,” Clark said. “We’ve never gone that high up the ladder.”

The elder Domi was wearing a throwback leather helmet fit snug to his head following practice, a day before the alumni outdoor game. While holding court on the topic of enforcers, in a hallway at old Maple Leaf Gardens, he stopped mid-sentence to greet former Wings tough guy Joey Kocur. The two engaged in a big hug and a few playful taunts.

“The game is where it’s buddy-buddy now,” McCarty said. “The only talking over the red line back then is where you were (taunting) a guy or you’re setting up a fight because you say, ‘I’m coming.’ It was never pleasantries.”

McCarty joked he would have never had a chance to play today.

“It’s a different game. You’ve got to understand it’s a college, European-style game,” he said. “I guarantee you, if I grew up and had to play this game, I would be learning how to hit that curveball, because that’s what kept me out of baseball.”

The elimination of the enforcer has been based on a series of rule changes. It began with the NHL in 1992 adding a game misconduct for players who start fights. That led to what was called “show fighting,” where both players would agree to square off so neither would be considered the instigator.

The NHL cracked down further on fighting to protect itself and its players from growing concerns over concussions, and the debilitating toll of repeated punches to the head. Rules freeing up the game from clutching-and-grabbing styles of defence also placed a premium on faster, more skilled players, and further reduced the need for plodding fighters.

A comparison of penalty minutes alone reflects how drastic the change has been.

Heading into Saturday’s action, Dallas Stars forward Antoine Roussel led the NHL with 87 penalty minutes in 35 games. Three months into the 1996-97 season, Vancouver’s Gino Odjick had a league-leading 214 penalty minutes. Roussel’s current total would have been tied for 33rd with Anaheim’s Ken Baumgartner 20 years ago.

Clark has no trouble with hockey’s evolution.

“Basically, it’s whatever society thinks they want to see. That’s it. Society judges all of us,” said Clark, who scored 330 goals and racked up 1,690 penalty minutes during a 15-year career.

As with any sport, Clark said, the top players will adapt and marginal players get shunted aside. One of the alumni game highlights featured Detroit’s Kris Draper and Toronto’s Gary Roberts exchanging shoves and slashes before Williams, Kocur and Domi pulled the two aside before anything escalated.

Oh, the irony of seeing one-time enforcers stepping in to actually stop a brawl.

McCarty couldn’t help but laugh at seeing two hard-hitting forwards such as Draper and Roberts picking up on a rivalry dating to their playing days.

“It’s just second nature that they reverted back to 20 years ago for the moment,” McCarty said. “They’ll laugh about it now, but that’s just what made them great players, and I think you don’t see a lot of that these days.”