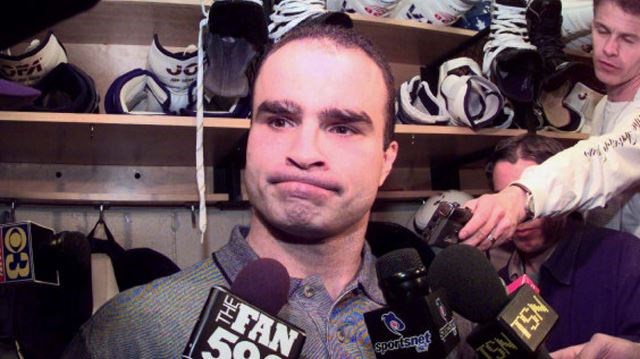 “Don’t get scared if you see my great big head going down the highway,” laughs the former NHL, who was in Ancaster last night and will be at FirstOntario Centre Sunday, promoting his new book “Shift Work.”

Domi’s public appearances these days are accompanied by a 48-foot double-wide trailer, wrapped in the cover art from Shift Work, and loaded with memorabilia from his unique NHL career. It will be parked outside Copps Coliseum Sunday afternoon, when Domi takes “Shift Work” to the Hamilton Bulldogs game against Peterborough, Domi’s old junior team.

Domi was the most active pugilist in NHL history, and he addresses that sustained toughness in his book, but doesn’t dwell on it in print or discussions.

“I had the most fights, it was my job to protect my teammates, but I didn’t want to concentrate on that in the book,” he told The Spectator. “I wanted to make positives out of the fights.”

And that’s done through conveying the lessons he learned from being an NHL policeman, from playing with Mark Messier and long before that, from his hard-working father, John.

Topping the lessons list was the issue of respect, something that Messier drilled into him when they were New York Ranger teammates.

“At the end of the day we all have mentors, and Mark was one of mine,” Domi recalls. “It was earlier in my career and I had had a pretty good game (against Buffalo), a goal, two fights, the game’s third star. The crowd was chanting my name. And he called me into the trainer’s room.”

Instead of congratulating him, Messier lit into Domi, warning him he had to curb his pro-wrestling theatrics and start respecting his hockey-playing peers or he’d never get any respect around the league.

“My career changed after that,” Domi says. “I toned it down. I followed him around like a little kid.”

From his father, Domi got “respect for old-school values, and I think they come across in the book.”

Domi says the biography revolves around the 11th chapter, which features “the mailman, the bellman, the shoeshine guy, the parking lot lady at the ACC.” He got permission from some of the people we notice only in passing to reveal some of their individual stories.

“I’m trying to get people to acknowledge other people,” he says. “If you order a coffee give the people in the coffee shop your time for 30 seconds, don’t just stay on your cellphone.

“Treat people the way you want to be treated. I think I’ve had that attitude my whole life.”

That attitude derived from his father, who also introduced his son to the value of physical and mental toughness. You have to be tough if you’re running a cash business (laundromats) in some of the tougher parts of Detroit, across the river from Domi’s hometown of Belle River.

“My dad died in my first year of pro and every game of my career I said a prayer for him right after the national anthem and then … away we go.”

Every year Domi turned down the chance to author a book until publishers agreed to let him write what he wanted, not just a fighting memoir.

“It originally started as a sports book, but now it’s about values,” he said. “I ended up changing it 14 times. And because I’m dyslexic, I had to listen to it to change it.”

Domi is, of course, proud of his son Max, a star rookie with the Arizona Coyotes who scored a goal in his first Air Canada Centre appearance.

“Unfortunately, for Max though,” Domi laughs of his legendary cranial girth, “he has my head, too.”