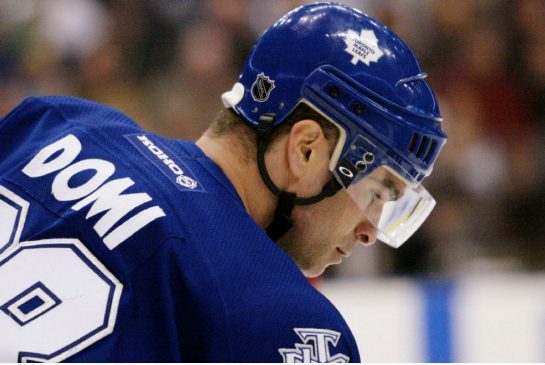 The book is an attempt to put it all in context, to explain where he’d come from, the values his blue-collar immigrant parents instilled and which he’s attempted to teach his own three children.
By: Rosie DiManno : Toronto Star

Tie Domi tilts back his head, pressing a finger against the tip of his oft-busted schnoz.

A dark empty cavity. No tissue, no septum.

Face now mere inches away, I examine Domi’s mug for remnants from a lifetime of enforcer hockey. Tapestry of scars across the top of his lips, cuticle indentations above the eyes, trellis of fading stitch marks spilling down one cheek.

Still, doesn’t look half bad for someone who fought 333 times in the NHL alone “and lost less than five of them.”

But look here, says Domi, pointing to the deep gouge from mouth edge across philtrum — the vertical groove above the lips.

As in: Stick-work of Scott Niedermayer.

Game 6 of the 2001 playoffs, Domi a Maple Leaf and Niedermayer a Devils defenceman.

Hockey fans will recall that incident, the only assault — flying elbow — Domi deeply regrets. Seven seconds left in a game and Domi chased Niedermayer into the corner. “We’re up by two goals. Even if I get a penalty, we’re not losing. I can get him now, right?

“Nailed him right on the button.”

Suspended for the balance of the post-season and the first eight games of the next season.

He revisits that episode at length in his new book, Shift Work, which he’s in town promoting this week.

“I apologized to my teammates for what happened,’’ Domi writes. “They knew I felt horrible about it. They tried to make me feel better by saying things like, ‘Hey, stuff happens in hockey.’ But Niedermayer’s injury didn’t just happen; I had caused it, and by doing so, I had gone against every value I had promised I would hold myself to.’’

Niedermayer had carved him fiercely earlier in that game, sliced him wide open from upper lip to nose. That was the back-story.

“Well, he said, ‘Come on dummy’ one too many times,” Domi writes. “I threw one punch, straight to his face, and knocked him out cold.’’

Dyslexic, someone who’d struggled to read as a child, Domi was particularly sensitive about that word; thought Samuelsson was mocking him.

Domi doesn’t really like recounting the bloody exploits of his career. But it’s unavoidable, his defining contribution to the annals of hockey. He was the muscle, the guy who took care of “the talent,” so skillful teammates from Teemu Selanne to Mats Sundin could ply their craft without fear, knowing Domi had their backs.

The book is an attempt to put it all in context, to explain where he’d come from, the values his blue-collar immigrant parents instilled and which he’s attempted to teach his own three children. That he’s an honourable guy, someone who treated everybody equally, he says, from the stars he skated alongside to the bellman and the parking lot attendant.

The fighting, he was just plain good at it, in an era when it was valued. “I had all those fights for my teammates.’’

Nobody ever taught him how to throw — or take — a punch. “Nobody ever hurt me.’’ Not in a fist-to-fist standoff anyway. And blows absorbed made little impact on that big melon of a head.

His encounters with Bob Probert were epic, none more vividly than Round 1 at Madison Square Garden, Domi a Ranger and Probert a Red Wing, the undisputed heavyweight champion of the NHL. Domi kept needling Probert. “Come on, Probie, give me a shot at the title.’’ Probert: “Get away from me.’’

Finally, endlessly pestered, Probert gave Domi what he sought. Some 40 punches were exchanged, the crowd going crazy. Domi got the best of his opponent. On the way to the penalty box, he mimed putting the title belt around his waist.

What a showman. Got chewed out by teammate Mark Messier for his theatrics, though.

Domi has a ton of stories to tell in Shift Work — like how he introduced “manscaping’’ to the Leaf dressing room, the shaving off of all body hair.

What the reader won’t find on these pages is any inside dish on his high-profile love affair with heiress-politician Belinda Stronach, or what he describes as “the most public divorce’’ in Canadian history from ex-wife Leanne. Didn’t want to put Leanne and the kids through that.

The kids, he says — Max, Carlin, Avery — are his proudest legacy.

A first-round draft pick by the Coyotes in 2013, Max is making his mark this season along with fellow generational-star rookies Connor McDavid and Jack Eichel.

Max merits his own enforcer protection. Not a fighter; doesn’t have to be.

But Domi remembers one occasion, in London, when his son was playing juniors. Dad and mom were in the stands when Max dropped his gloves coming to the aid of a younger teammate.

Afterwards, Domi had a word with his boy.