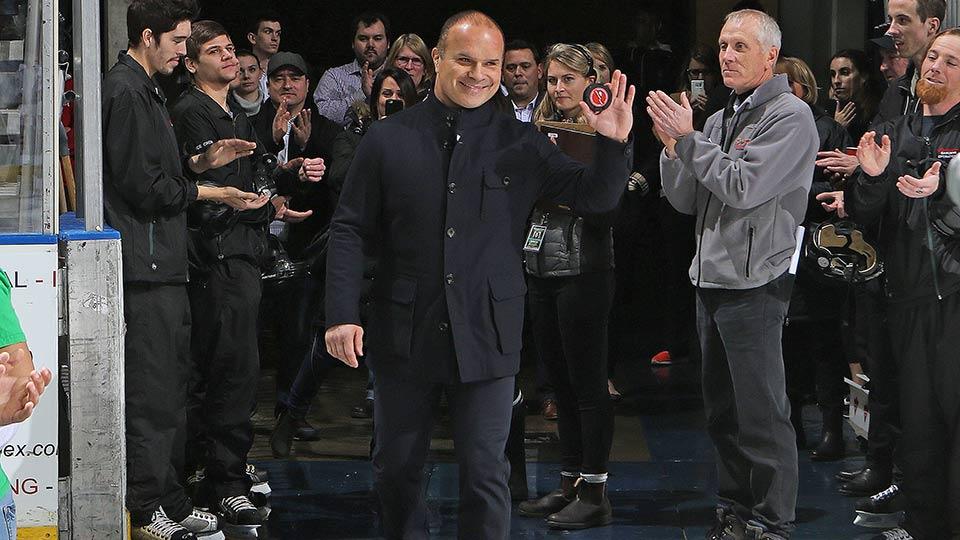 Former enforcer Tie Domi thinks he’s fought more than anybody ever: 333 bouts in the NHL. Those are on top of his countless preseason fights or the times he dropped his gloves in the minors and juniors. But he’s done talking about that part of his 16-year career with the Maple Leafs, Rangers and Jets. With his new book, Shift Work, Domi wanted to tell the story of his father, his son—Arizona Coyotes rookie star Max—and the everyday people who make life great. Domi recently chatted with SI.com about the state of fighting in hockey, respecting others, and the Biebs.

Jeremy Fuchs: Some fighters say they don’t respect a guy who won’t drop the gloves.

Tie Domi: To be honest with you, I was never expected to [fight] and nobody ever told me to. I did that for my team and my teammates. I protected Mike Ricci. I protected Mike Ricci in juniors, you know what I mean? I understood that whole thing when I was 14-15 years old and then [came] three years of junior, and then the minors, preseason games, playoffs and the street. That’s like 500 fights. I didn’t want to write about being the person who’s probably fought the most on the planet. I did it, and I wanted to be the best at it, and because of my size (5′ 10″, 213 pounds), I had to be smarter than anybody. I’m too small not to be sharper than the other guys. I was too small not to make sure I was sharp. That’s why I wasn’t a big partier or drinker, because I couldn’t afford to not be on my game. Because every single game I played in the NHL, I always had to be ready to go at any single time. JF: There are a lot of guys nowadays who lay out big hits or do a lot of talking, agitating, and then don’t fight. Does that bother you? Does that speak to the lack of respect factor?

TD: It’s a different time and it’s a different era. We all know what we did in our era. We made everybody accountable. We policed the game ourselves, the best we could. When you see some reckless stuff against the best players, that’s where the league has gotten much better at protecting the players because it’s almost no tolerance. Like the Raffi Torres hit—you just gotta be aware of situations. The speed and the fact that guys are vulnerable.

Scott Stevens, he would’ve been suspended probably every other game. That’s why I always chased him around. Because he always targeted guys when they were vulnerable. He never fought me. He was the type of guy who hit guys who were vulnerable. When we policed the game, we made guys accountable. That’s the bottom line. It’s a different time.

I watched the last four years in junior hockey where my son played and he was the leading scorer, and he was targeted every single year from his first to his fourth. I’m in the stands watching this. It’s tough to watch. Juniors has a long way to go. They’re the ones that want fighting out of hockey. [NHL commissioner] Gary Bettman has never said he wants fighting out of hockey once. Junior hockey is where they say fighting, fighting, fighting. It is dangerous out there. Max’s first year, against Barrie, he got blindsided. Last year in the playoffs he gets blindsided, elbow right to the head. He was out the rest of playoffs. That’s how junior hockey [is].

JF: Some of the most poignant chapters in your book are about Bob Probert and Wade Belak. Unfortunately, we’ve seen a lot of guys struggle after their careers end. Do you think fighting, and the repeated hits to the head, played at least a part in their troubles? Are you concerned at all?

TD: That’s why I wrote this book. [But] I’m going forward. I don’t really talk about that stuff. I enjoy every day. I like to be around people I like to be around. Regardless of who I was, that’s the way I am. I put my walls high. The people I’m around now, you know who my friends are. They’re in the book. Normal guys. And that’s why they’re in there. That’s why Mark [Messier] is in there, Mario [Lemieux] is in there. They’re in there not because they’re my longtime friends, but they’re all humble stories. I’m trying to get that message across. Acknowledging, respecting, being humble, keep it real. Those are the messages.

JF: What are your old school values?

TD: Treating people how you want to be treated. That’s really the gist of what I wanted to do with the book. I really wanted to dedicate it to my father. I wanted one chapter for the everyday person. The parking lot lady at the Air Canada Centre, or the security guys or the Zamboni guys or the ice crew, those guys were like family when I played. When I go to the ACC, they treat me like their own family.

TD: It’s life lessons and life values, dedicated to my father. I only would do a book if it was done my way. When you have guys like Mario Lemieux come to the Canada book launch and the New York book launch, and then A-Rod, Floyd Mayweather comes. Justin Bieber Instagrams me a picture. How does this all happen? I haven’t changed. Those guys are normal guys. Justin Bieber asked me if he could come to the game when Max played against the Islanders. He was into the game, very respectful, and very humble. These guys are real guys in the limelight.