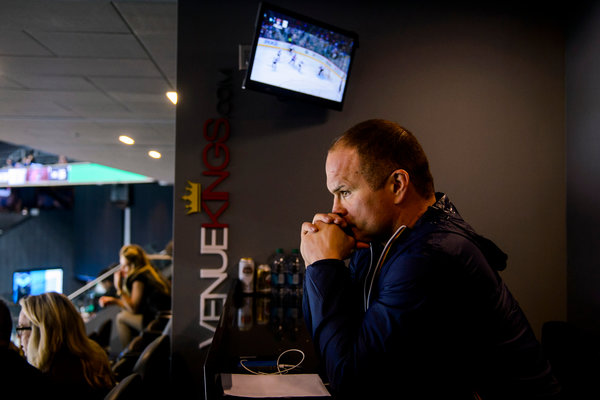 Intensely watching his son Max battle the Islanders this week, Tie Domi was temporarily distracted when a fellow Canadian appeared in his Barclays Center suite.

After sharing a few hugs, that Canadian, Justin Bieber, and his entourage quickly took seats next to Domi, the former N.H.L. tough guy, their collective attention focused on No. 16 darting about the ice below wearing the white, red and black of the visiting Arizona Coyotes.

The play did not go Arizona’s way, leading Domi to exhale with angst and to utter several colorful words of frustration. Max Domi went on to finish the game with an assist, but the Coyotes lost, 5-2.

Still, this season has been thrilling for Tie Domi, who last played in the N.H.L. a decade ago, for the Toronto Maple Leafs.

Max Domi, a speedy left wing who was a first-round pick in 2013, has eight goals and eight assists and is second to Artemi Panarin of the Chicago Blackhawks in points among rookies.

Tie Domi attends as many Coyotes games across North America as he can. He has seen Max play at Madison Square Garden, where Tie played two and a half seasons for the Rangers and famously fought Bob Probert in 1992. Tie saw Max score early in his first game and in an Arizona victory at Air Canada Centre in Toronto, where, at 46, the elder Domi still has rock star status.

“I feel blessed I am stopped everywhere I go in Canada, especially in Toronto,” said Domi, who played for the Maple Leafs for 12 seasons. Tie Domi, left, took on Ken Belanger in one of his 333 N.H.L. fights. “The life of an enforcer is thankless,” he wrote in his book “Shift Work.” JIM BOURG / REUTERS

Domi gained popularity by being an agitator. It is a role that has come under increased scrutiny in recent years as hockey, like football, has grappled with the effects of concussions. Lawsuits brought by former players have claimed that the N.H.L. hid the dangers of repeated head trauma and promoted violence on the ice.

Domi addresses the culture of fighting and his past as an enforcer in a recently released memoir, “Shift Work,” which is a best seller across Canada.

“There’s been a dark cloud over fighting,” Domi said. “I wanted to write about life lessons and life values, treating people how you want to be treated. I wanted to utilize my platform and turn it into a positive.”

Domi devoted a chapter in the book to Probert, describing the circumstances of their memorable fights and eventual friendship. A renowned enforcer, Probert died of a heart attack in 2010 at age 45 and was later found to have chronic traumatic encephalopathy, a degenerative brain disease caused by repetitive hits to the head. Max Domi, a speedy left wing who was a first-round pick in 2013, has his fans already. ALEX GOODLETT FOR THE NEW YORK TIMES

Four other former N.H.L. players are known to have had C.T.E. Another enforcer from Domi’s era, Todd Ewen, committed suicide in September at 49, and his brain was donated to a concussion study.

“They went through the mental and physical part that I did in that job,” Domi said of writing about the players he had fought. “Unless you did the job, you really can’t speak the language. Only the guys who did the job can understand the mentality of what you go through. And how you handle it.”

Domi’s book also singles out Wade Belak, a teammate with the Maple Leafs whose role was similar to Domi’s. Belak battled depression and died at 35 in 2011, just months after retiring.

“The life of an enforcer is thankless,” Domi wrote. “The pressures are constant, and others always come first. You have one job to do, and it’s not very glamorous.”

Domi spoke at Belak’s funeral and was upset that it was not well attended by the former teammates whom Belak had protected by fighting.

“The fact that Wade didn’t have that really bothered me that night, and it still does,” Domi wrote. “It was a clear reminder that what we do in the N.H.L. isn’t our life; it’s just our livelihood.”

Despite his long list of on-ice battles, Domi writes that he never took medication for pain during his career, and he appears to have escaped the problems that plague many of his contemporaries.

“I feel good,” he said during a break in the action in Brooklyn. “I’m lucky.”

In Domi’s playing days, head injuries were not discussed as they are today. “Only language I knew was ‘got your bell rung,’” he said.

Domi said he did not spend time worrying whether he might have physical concerns later in life.

“I don’t think about it,” he said. “Obviously it’s the question that has been asked so much, but I refuse to go down that path. I keep enjoying every day. That’s what my life motto is. I keep the nose going forward.”

Domi said he loved his role as a hockey father and shows no qualms about his son, a more skilled player than he was, following him into the sport.

“I watch everything he does; once you’ve been down there and now being up here, you really see everything,” said Domi, who played 1,020 games for the Rangers, the Maple Leafs and the Winnipeg Jets. “Max has loved the big stage since he was a kid. I sensed he was good enough to make it when he was about 10. He always had that scoring touch.”

It did not hurt that Domi’s teammates — like the Hall of Famer Mats Sundin, the Leafs’ career scoring leader — also took his son under their protective wing.

Bieber, who was born in London, Ontario, where Max Domi starred for the London Knights of the Ontario League for the past three seasons, was on board rooting for the visitors in Brooklyn, the Islanders’ new home this season. Bieber is a year and a day older than Max Domi, who had 37 goals and 102 points for the Knights last season.

“Keep it in the zone,” Bieber implored Domi’s line during the second period as the Coyotes tried to maintain control of the puck in front of Islanders goaltender Jaroslav Halak.

Tie Domi’s friendship with Bieber is a reflection of his approach to life. At a Manhattan party promoting his book this month, Domi was joined by Alex Rodriguez, Mario Lemieux and Floyd Mayweather Jr. But also present were key people he had met in his travels: a waiter and bellman from the Four Seasons hotel in New York, a longtime shoe shine person from the Waldorf Astoria and staff members from his favorite TriBeCa coffee spot.

“I make friends everywhere because I talk to people and find out about their lives,” Domi said.

Domi admits it has not always been easy for him to keep calm as an observer. There was a reason he spent 3,515 minutes in the penalty box.

“It was hard watching the other team target Max as the best player on the Knights because I know what I would do to opponents in those situations,” he said. “I had to protect our top guys when I played. And I did.”