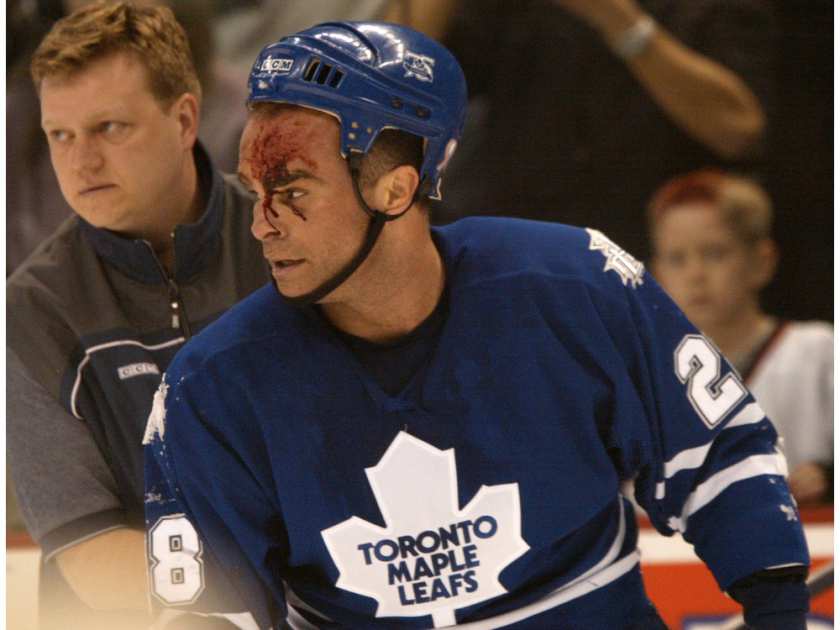 These days he is the best-selling author of the memoir Shift Work, and the one-time hockey enforcer is telling the story of those years and much more, he says, the way he wanted to tell it.

“It was so much fun to play in those games, in those series. It was probably the most fun time of my whole career.

“We always knew we were getting into a war and it seemed like we were always the underdogs; on a paper point of view.”

But Domi, whose success in hockey was built on hard work, confidence and a fierce competitive spirit, said those Leafs teams knew they could beat Ottawa.

“We always believed we could beat them. Mentally, we always had that advantage. Mats (Sundin) always led the way and Cujo (Curtis Joseph) or Eddie (Belfour) and the rest of us just followed.”

Domi, too, played a role, especially one time when he really used his head.

“You guys were beating us 2-0. We had nothing going on at all. You know how sharp the boards are, right? I kind of saw him (Ottawa defenceman Ricard Persson) coming. He didn’t hit me that hard but when he did hit me I purposely hit my head (on the boards) just above my eyebrow.

“I knew as soon as I saw the blood I had done what I wanted to do. Everybody knew on our side that I did it on purpose.”

That cut came on May 12, 2002 and it was a turning point in a crucial game. Recently the Citizen called that 4-3 loss the worst ever suffered by the Ottawa Senators.

At the end of the day it is about winning, Domi says, and doing whatever it takes.

Domi put his “unique head of mine to good use at the right time.” But his book is not about all the fights (333 in the NHL) or about the lingering effects of 17 years in the NHL. In fact he won’t talk about any of that.

“I’d like to be known for playing the most playoff games for the Leafs in the last four decades.”

The playoffs were Domi’s time. And he reveres the two coaches, now gone, who helped him get to that level. Pat Burns and Pat Quinn were the best coaches for whom he played. Burns, in particular, told him to practise hard and he’d be rewarded.

“I definitely changed when I started playing for Pat Burns. He would say, ‘Give me the best you have got in practice and I will make you a better player.’

“When a coach tells you that, it’s like music to your ears. He changed my career; he gave me the confidence that I could play regularly, especially in the playoffs.”

Domi is now watching his son, Max, who has overcome his own obstacles to make the NHL as a first-round pick of the Arizona Coyotes, not least of which is diabetes.

“Max is 210 pounds, all legs and butt. He needs custom jeans to cover his big buffalo butt. He’s got my heart and he has an edge.”

Domi isn’t worried about his son in the NHL. But he was concerned when Max was playing in the Ontario Hockey League with the London Knights.

“There is no protection there whatsoever. That league has a long way to go in protecting its best players.

“The NHL has gotten better but you still have to be more aware and alert because things happen so much faster.”

And he worries about the lack of respect players show for their opponents.

“I just don’t know if that respect is there. When Bob Probert, Joe Kocur and I were doing the job, we policed the game the best we could. It’s a different time.

“I think (Ottawa Senators) Chris Neil is the only guy left who plays the way I did.

When this son of immigrant parents was growing up, sport was his medicine. Domi has dyslexia and had an attention deficit disorder, making education difficult, so he used sport as his way forward.

“Hockey was probably my fourth-best sport. My best was soccer. It was the cheapest and I was a fast runner and a goal scorer in soccer. I could have gone to Europe when I was 16 to play soccer but my dad put the kibosh on that.”

Instead he joined the Peterborough Petes and made his way to the NHL.

Because of his dyslexia, Domi dictated his memoir. The interviews and information were gathered by sports journalist Jim Lang. It was a painstaking three-year project.

“I went through every single line. I wanted my voice said my way.

These days Domi isn’t looking back. He is still playing sports.

“I’m a squash player now. Chasing the ball is like chasing the puck around but you only have to go two or three steps at a time.”