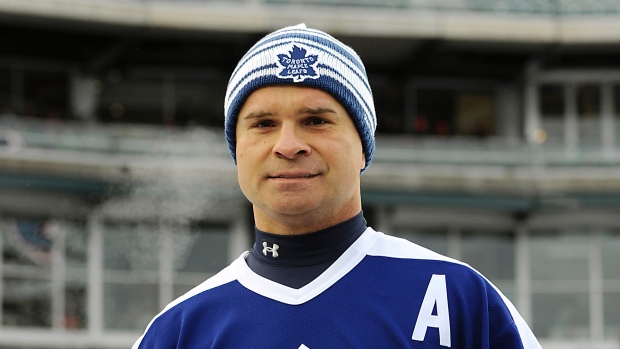 Of course a book about the man who’s the third most penalized player in NHL history (3515 minutes) is going to have a few tales on throwing haymakers (and there is), but Domi says there’s more to the book than dropping the gloves. It’s about his growth as a player and a person.

Domi’s book features stories from his 16 seasons in the NHL with the Winnipeg Jets, New York Rangers and Toronto, where he became a fan favourite on a pretty good Maple Leafs team led by Mats Sundin. There’s also a lot of focus on his life experiences and the people who were there for him that may not have a voice to share their stories.

“The waiter, the bellmen, the TSA guys, shoe shine guys, car wash guys, the people who work at the rink, the ice crew, parking lot lady, security guys, the Zamboni driver. Real-life stories,” said Domi. “I live it every day. I stick up for those people. I say what they want to say.

“I don’t want to talk about having the most fights. It’s part of my job.”

Domi, 46, retired in 2006 and said he went through some difficulties adjusting to life away from the rink, including a divorce and the 2008 financial crisis.

“I was freshly retired and the guys on Bay Street were either taking my money or using me to raise money,” explained Domi. “So I went through difficult times after my career.”

He wasn’t ready to put together a book at that point, but a few years had passed when the publishing company Simon & Schuster Canada gave him a ring.

And so Domi, along with co-writer Jim Lang, took three years to put together the story of a 5-foot-10 fighter and all the peaks and valleys that come along with a life in hockey. Domi, who is dyslexic, said it was a difficult task, but received plenty of help from his girlfriend, daughters and sister.

One interesting tidbit focuses on an incident from the 2001 playoffs when Domi threw a vicious elbow to the head of New Jersey Devils defenceman Scott Niedermayer during Game 4 of the eastern conference semi-finals, knocking him unconscious. Domi was suspended for the rest of the playoffs and the Leafs would go on to lose the series in seven games.

“The stupidest thing I’ve ever done in my career when I was playing the best hockey of my career,” Domi said of the incident.

The book is dedicated to his father and has a single message that Domi wants to get out to all his readers.

“Treat people how you want to be treated. Old-school values,” he said “If I can help a few people, then it’s successful.”

Domi is back in the news these days not only because of his book, but the fact that his son, Max, is lighting up the league as a rookie with the Arizona Coyotes.

“He’s lived the life and he knows what to do. He has to work hard every day to get better as a pro and it’s the best league in the world,” Domi said of his 20-year-old son who regularly hung out with his father’s teammates as a kid growing up in Toronto. “This is what he’s preparing his whole for. He’s made a lot of sacrifices since a young age. I’m really proud of him how’s he handled himself.”

Max sits second behind New York Rangers’ Oscar Lindberg in rookie goals with five and second behind Connor McDavid in rooking points with 11.

Tie got to see his son score his first NHL goal at his old stomping grounds, Air Canada Centre, when the Coyotes were in Toronto in late October. His reaction was a little delayed.

“People had such opinions on my reaction. I actually didn’t know it went in because I was so shocked he shot it. My eyesight isn’t that great and it was in and out. It was almost a surreal moment. His first shot at the building where he was on the ice everyday as a kid,” said Domi who was watching from a box at the ACC. As for the keeping up with the current Maple Leaf squad, Domi says he simply doesn’t have the time for it, but has
faith they can turn it around.

“At the end of the day it’s a big business. It’s a results business. The hired the best guy to coach and he definitely brings creditability and accountability, something that has been really lost since Pat Quinn left the team,” said Domi of Mike Babcock.

“The biggest challenge is going through turnover in hockey. It’s a young man’s sport now and it’s who is able to guess on those future players. That’s the big gamble. I think the rebuild thing has a lifespan. You can only use that for so long.”